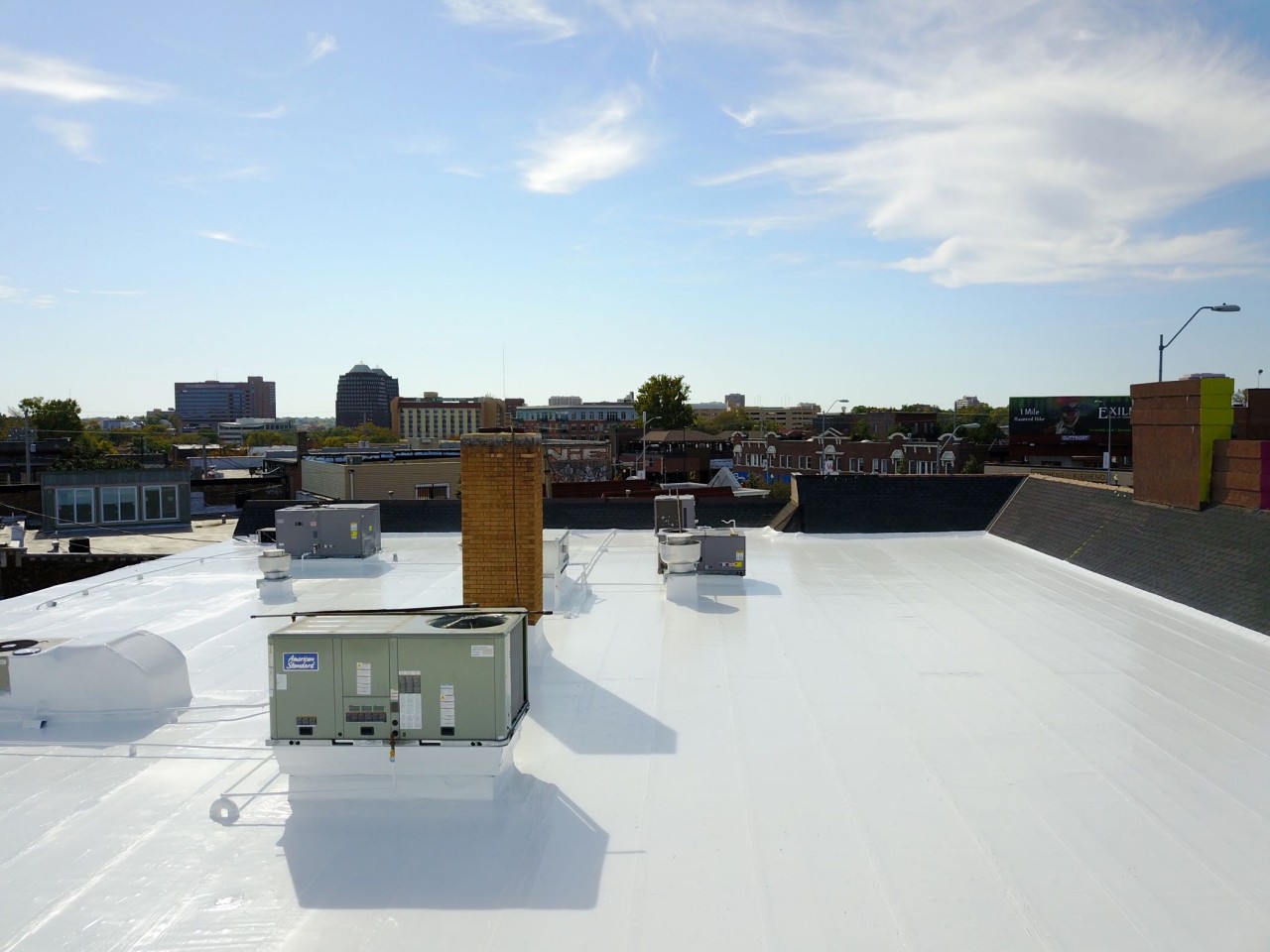 In Kansas City- Missouri, the neighborhood of Westport is known as an entertainment area with festive pubs, bars and historic buildings, rich with culture. The

building located at 3957 Broadway Blvd sits just north of the heart of downtown Westport and has housed several diverse tenants over its years. In 2016, the ownership of the building changed and the new owner’s goal was to revamp the 3-suite building, bringing back full occupancy. Rennovation commenced in 2017 and one of the major issues with the building was its old, leaky roof made it unattractive to potential tenants. With that being said, the roof became a priority and an essential fix to entice new tenants.

With this building being older, the existing modified bitumen roof had seen its better days. Although the roof had a 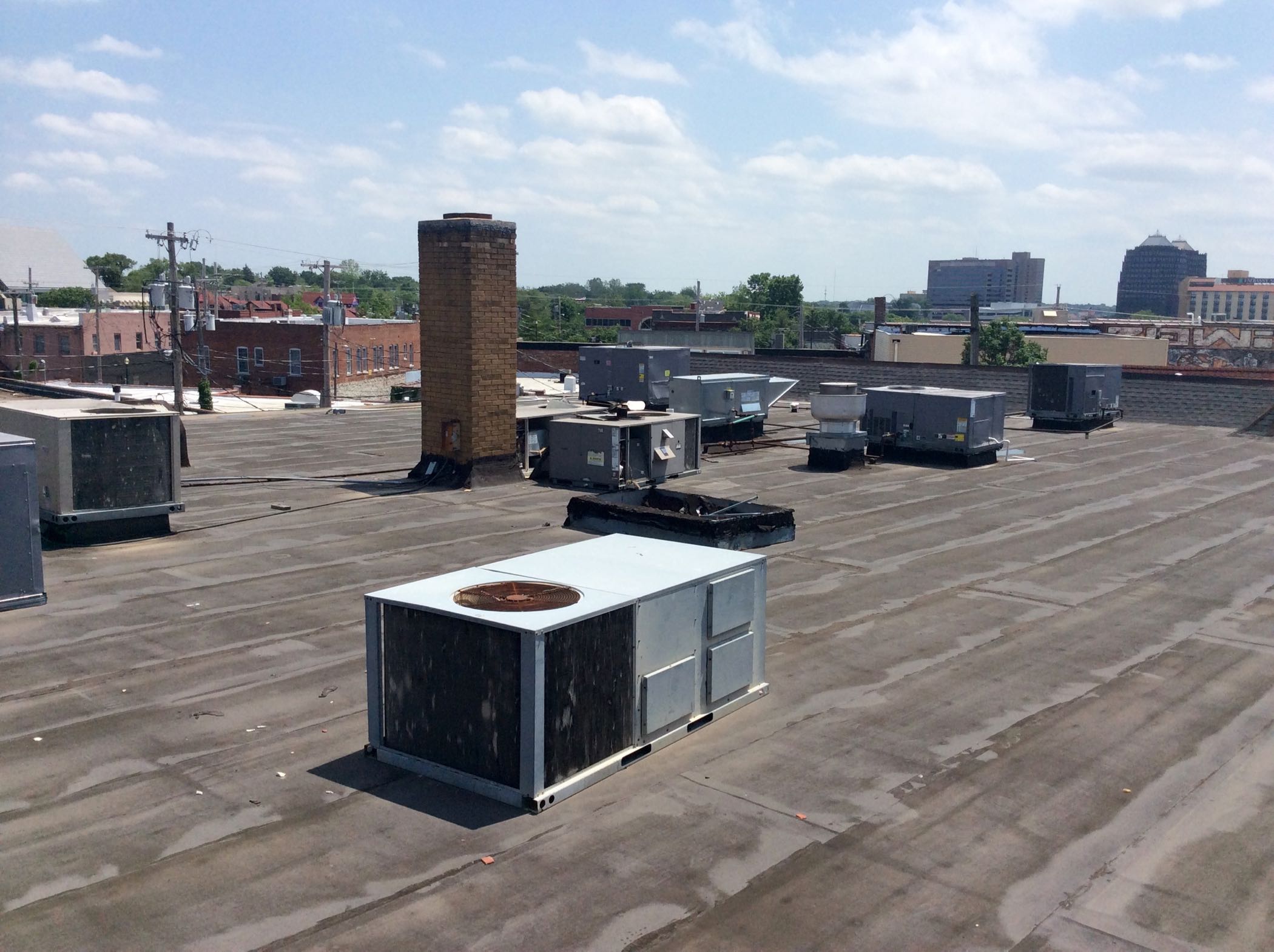 good slope for a low-sloping roof, there were many areas where water had started to pond and therefore break down the membrane and deteriorate at the seams. Over the years and many different tenants, air conditioners and piping had changed and therefore the previous contractors had left the old units sit on the roof to deteriorate. So, on top of a leaky, failing, old modified bitumen roof there were several obsolete HVAC units, piping, and miscellaneous items that needed to be removed from the roof. 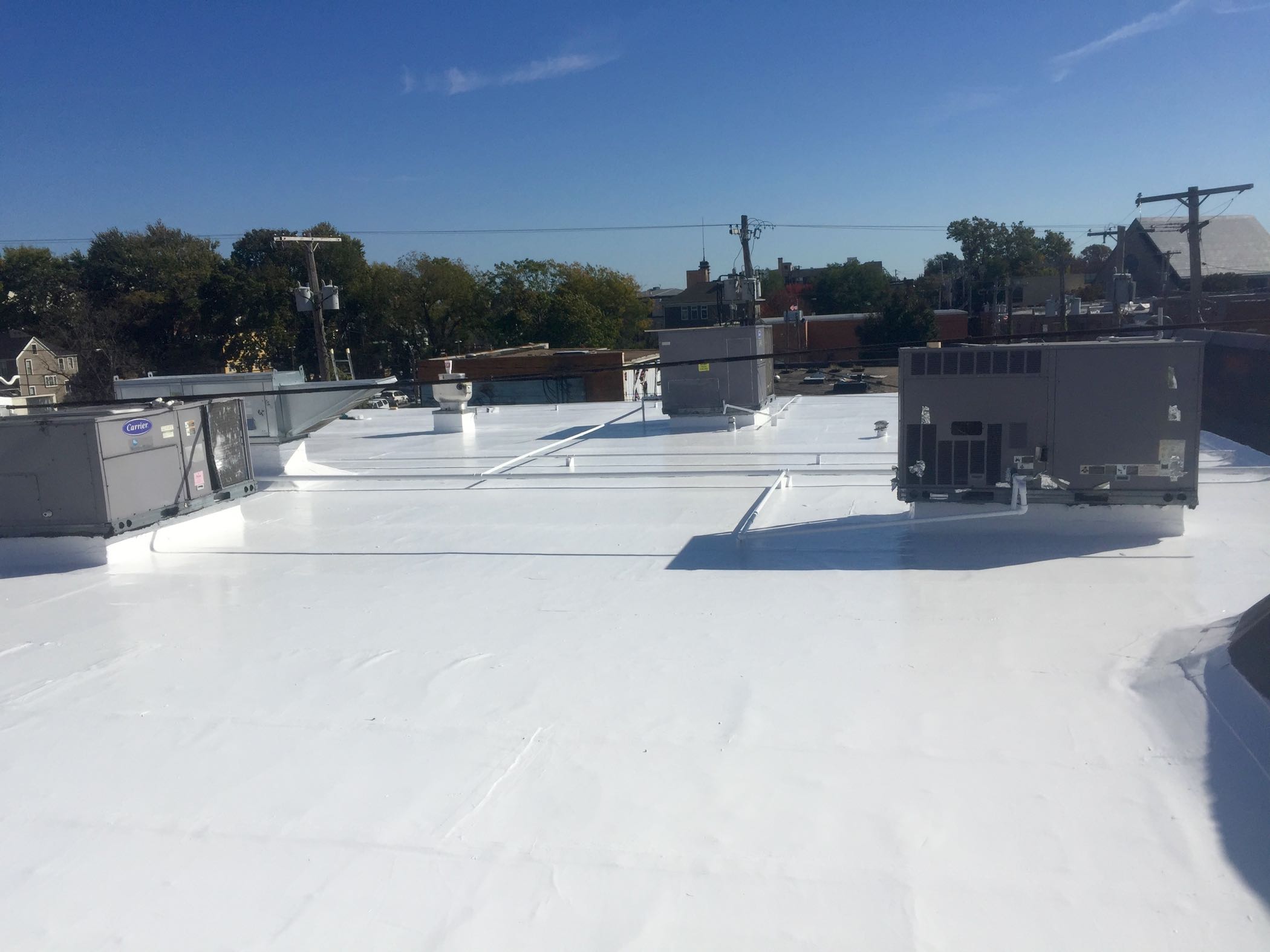 On this project, Major Painting partnered with Farha Roofing. Farha Roofing, a commercial roofing contractor was responsible for removing all obsolete equipment from the roof as well as removing the old membrane on the North parapet wall and replacing it. For this 7,500 square foot roof we proposed restoring the roof with a Silicone Roof Coatings System manufactured by Progressive Materials. We chose the silicone roof coatings system because the existing roof was fully adhered, structurally sound, and the silicone systems is cost efficient allowing the Owner’s dollars to go further in his update of the building. The process to coat this modified bitumen is a little more extensive than that of other coating systems. Before the coatings process started a thermal image scanning of the roof was conducted to locate any areas of moisture retention. There were only (2) spots found to be holding moisture under the membrane for a total of 50 square feet. The installation process of the coatings commenced with pressure washing the complete field, removing all dirt and debris allowing the coatings to properly adhere. The second step involved applying an acrylic primer to the complete field. The primer was applied not only to ensure the silicone coating would adhere properly, but also acts as a bleed blocking agent. With any asphalt type of roof, there’s a chance the silicone will react with the asphalt when they’re in direct contact creating a chemical reaction where the particles in the asphalt move towards the surface of the silicone, resulting in a yellowing of the silicone. Although the yellowing does not affect the integrity of the silicone roof coatings system, it has been known to slightly reduce the energy efficiency due to it not being as reflective. After the primer was applied, the third step was to go back with Progressive Materials HS3200 High Solids Silicone finish and coat all the seams with 10-15 mils of coating. While applying the coating to the seams we were looking for any seams that were starting to deteriorate or were not fully adhered. In the case of a failing seam, we would coat the seam, apply a flexible fabric and recoat the seam to ensure the seam was sealed tight. 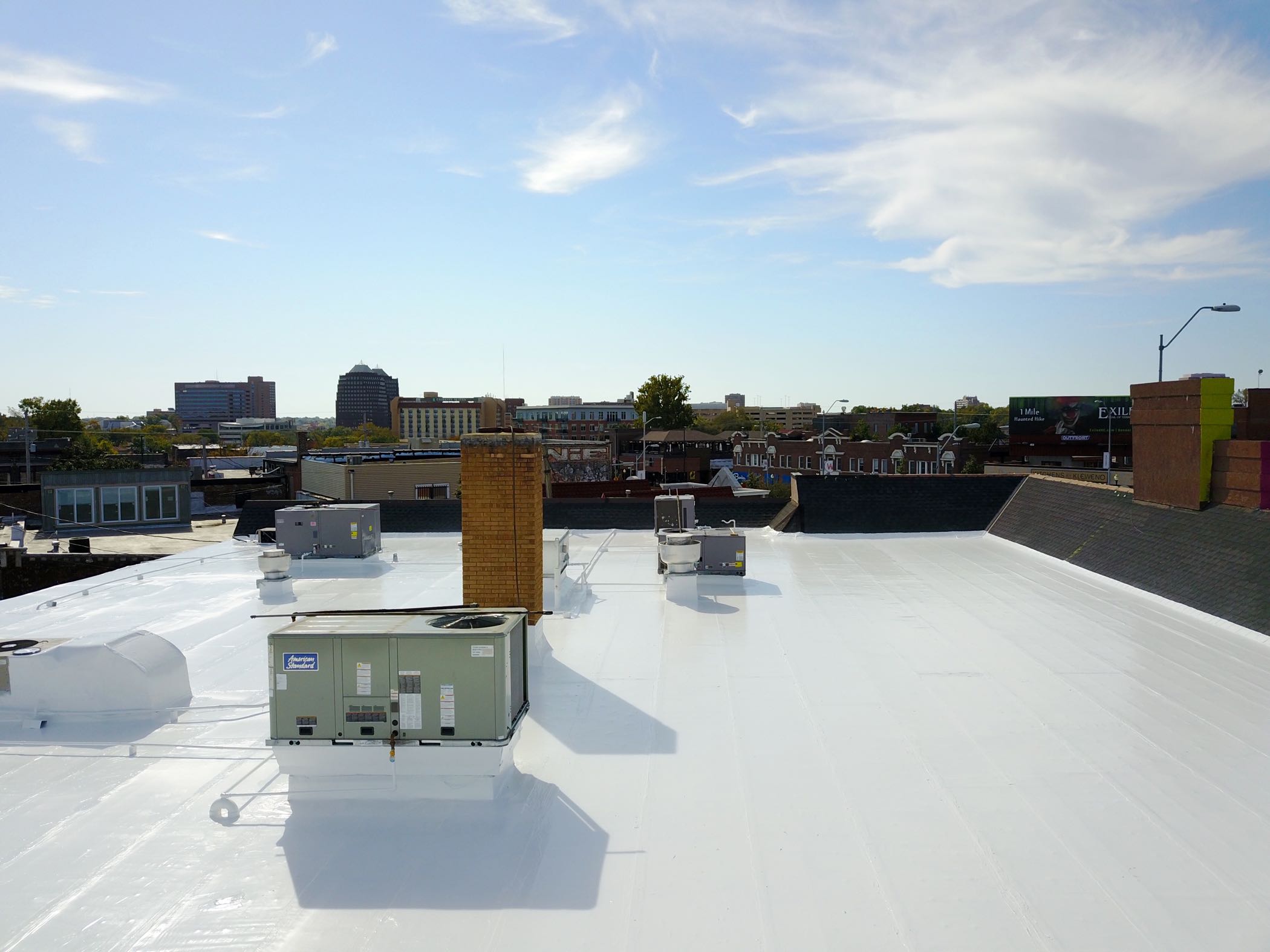 After all seams were coated, 30 mils of the High Solids Silicone finish coating was applied to the complete field by a sprayer. The Silicone Roof Coating Restoration System Major Painting installed to the existing modified bitumen roof system, fully restored the existing modified bitumen roof system while adding additional benefits such as energy efficiency due to the reflectivity of the coating, warrants against ponding water, environmentally friendly due to no tear off being needed, and most importantly great cost savings!

If you are interested in restoring your flat or low-sloping roof please contact us for a free consulation to see if you're roof is a possible candidate!

Chase DeRousse is the Vice President of Painting at Major Painting and strives to deliver quality craftsmanship coupled with superior customer service, creating a unique and pleasant experience for all Major Painting customers, no matter the size of the project. Chase also holds an active Class A General Contracting License.

Chase has won multiple accolades recognizing his leadership and excellence in the painting industry including awards from the Painting Contractor Association (PCA), Business Owners and Managers Association (BOMA), and Institute of Real Estate Management (IREM).

Ask Us A Question