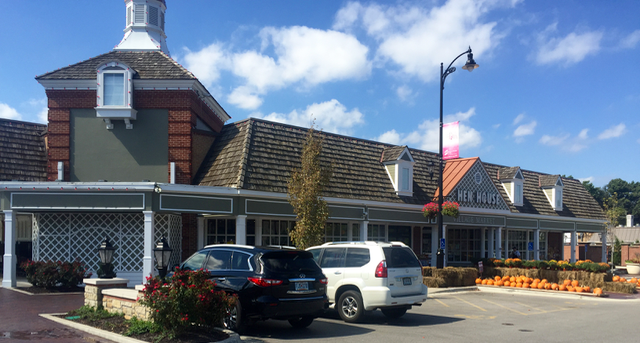 Over years of weathering and miscellaneous contractors adding and removing material to the façade at the Hen House in Prairie Village, it was time to renew the storefront. On the East elevation wood rot was caused by leaking gutters as well as failing paint. On the North elevation the complete façade had to be reworked due to water penetration causing excessive damage and wood rot.

On the East elevation, approximately three wood sign panels were removed and replaced, latticed were reworked, new crown molding around the upper windows was installed, new gutters were installed, two faux columns were removed from the front entrance, and all of the columns received new trim. This elevation also received a fresh coat of PPG Exterior WeatherKing Satin Paint to match the existing color scheme.

The North elevation was in the worst shape. Due to poor flashing and excessive water damage, all of the wood sign panels had to be removed and replaced. The paneling was replaced with 4x8 smooth primed siding and the existing vinyl trim was replaced with 1x3 cedar trim. The whole façade was then repainted using PPG Exterior WeatherKing Satin Paint.

This project was completed over a two-week span. The largest challenge faced was the heavy flow of store traffic. Store interference was minimized by taping off work areas and redirecting the store traffic when around the front entrance of the store.

Before joining Major Painting, Chase attended the University of Missouri-Columbia and studied Business Finance with and emphasis in Commercial Real Estate and also earned a minor in Entrepreneurship. After graduating from MU, Chase joined the family business, Major Painting, which specializes in Commercial Repaints and Maintenance Coatings for Property Managers, Facility Managers, and Local Building Owners in the Greater Kansas City Metro. Chase currently serves as director for the Painting and Decorating Contractors of American - Commercial Forum and is involved in and serves on the board of many local business organizations such as the Institute of Real Estate Managers (IREM), Building Owners and Managers Associations (BOMA), and the Helzberg Entrepreneurial Mentorship Program.

By accepting you will be accessing a service provided by a third-party external to https://www.majorpaintingco.com/

Ask Us A Question